Through funding kindly donated from the Cardiff 1910 Trust, Jake has had the opportunity to broaden his horizons and take part in the YMCA World Council meeting in Chiang Mai, Thailand. 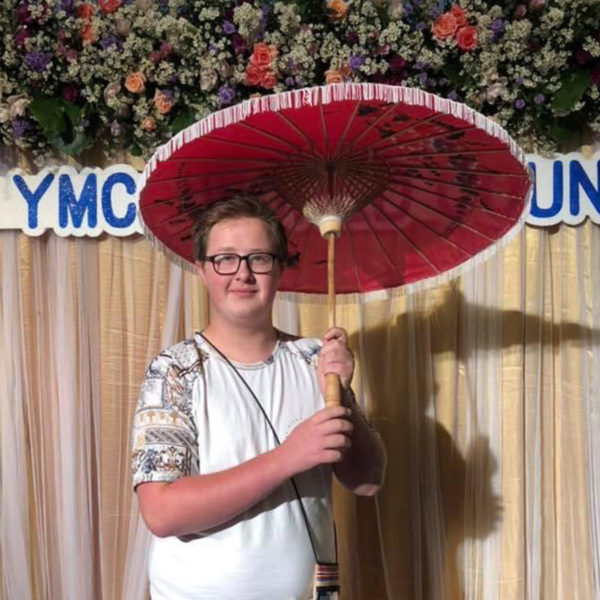 Jake has been a young carer since he was 10 years old, looking after his mum. A young carer is someone under 18 who helps look after someone in their family, who is ill, disabled or misuses drugs or alcohol.

Being a young carer has at times, limited Jakes opportunities and the chance to socialise. From being involved with YMCA Cardiff’s Time 4 Me Young Carer’s Project and now the ‘Time 4 More’ Young Adult Carers Project, he has thrived and grown hugely, showing both his dedication and passion to support other young carers on the project.

Through funding kindly donated from the Cardiff 1910 Trust, Jake has had the opportunity to broaden his horizons and take part in the YMCA World Council meeting in Chiang Mai, Thailand. Over 700 young participants were expected in Thailand, where the YMCA Change Agents and YMCA Ambassadors played a key leadership role. All participants, Jake included, became part of a global group of about 15 people who will work together throughout the World Council. The YMCA World Council theme was dedicated to the global focus and long-term vision of ‘Empowering Young People.’ The World Council meeting was a celebration of hundreds of YMCA Change Agents who are the leaders of today and tomorrow.

Through attending this event in Thailand Jake has been ‘empowered to make change’ and continues to be an active member within YMCA Cardiff Youth and Community Department. The event gave him the opportunity to share his story and experiences with other young people from across the globe. The funding from Cardiff 1910 Trust to support Jake has had a profound impact on Jake and has empowered him to believe in himself more than ever. He has further ambitions to travel more to be a successful role model to other young carers and young people in his local community. YMCA Cardiff would like to thank the 1910 Trust for the support to Jake, in giving him the opportunity to participate in such a fantastic event.

Are you involved in a similar project? Make an application for funding from the 1910 Trust: